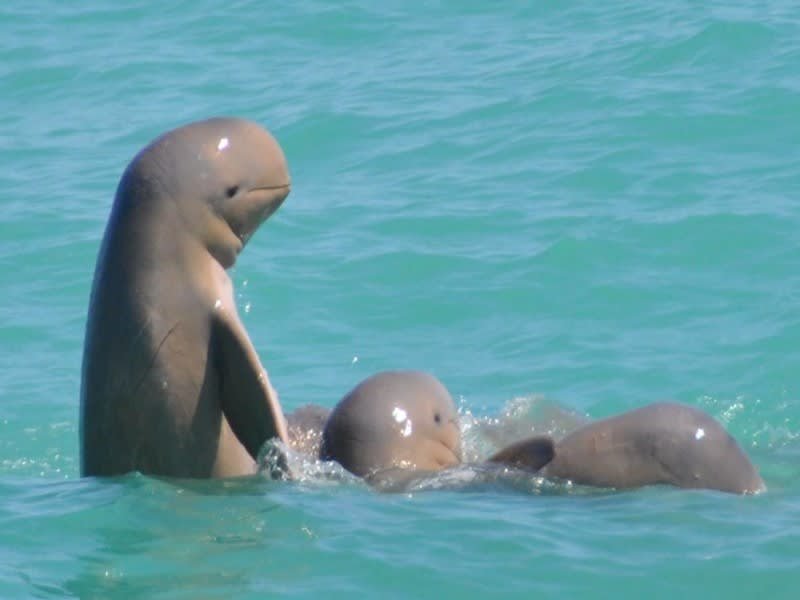 Roebuck Bay is an incredibly diverse ecosystem and its extensive seagrass meadows are home to a myriad of marine life. Our Eco-Tour takes our guests to see our resident snubfin dolphins in the stunning turquoise bay and other residents are frequently seen throughout the tour. As pioneers of whale watching in the Kimberley, our passion for marine life and desire to share the incredibly diverse ecosystem of Roebuck Bay has become our next venture. In 2015 Roebuck Bay became of international importance and was declared a Marine Protected Area. What was once an embayment for pearling and a channel for trade, is increasingly becoming known as one of the most diverse mudflats in the world, making it one of 12 Ramsar sites in Western Australia. If you are looking for some things to do in Broome, this eco dolphin cruise should be added to your Broome bucket list. Whatever month you choose to cruise Roebuck Bay, Western Australia, there is bound to be some friendly dolphin, turtle or dugong ready to say g'day.

Morning Dolphin Cruise: Relax on a morning discovery as we search for one of Australia's largest population of snubfin dolphins and an array of marine life in Roebuck Bay. Spot snubfin dolphins or bottlenose dolphins socialising and having fun in the sun on your morning dolphin cruise. Depending on the seasons, you could catch a glimpse of the graceful manta rays or watch turtles bobbing their heads on the water. Free door to door bus service provided with freshly baked morning tea and hot beverages onboard. Afternoon Sunset Cruise: Fancy the warmth and beauty of a magnificent Broome sunset. Why not join us on a 3-hour Broome sunset cruise with a chance to see the snubfin dolphins? Sink into a bean bag and embrace the stunning sunset of Roebuck Bay as our friendly team treat you to delicious canapes. Chilled alcoholic beverages are available for purchase from our licenced bar. If you prefer to BYO, bring your own and we will do the rest for you. Whether it is a morning or afternoon cruise you choose, this great value dolphin cruise in Roebuck Bay is an ideal way to spend your day. Guaranteed dolphin sightings or travel again for free. We are here to make memories with you. Roebuck Bay is an incredibly diverse ecosystem and its extensive seagrass meadows are home to a myriad of marine life. We often refer to the bay as a food generating machine and it is this that allows it to support so much marine life all year round. Snubfin dolphins: Roebuck Bay is home to the world's only resident population of snubfin dolphins. Measuring around 2 metres in length, the snubfin dolphin is much smaller than the more commonly seen bottlenose and was only identified as a unique species in 2005. Named for its tiny dorsal fin, this species is a slow-moving marine mammal and just like the locals in our town, seems to run on Broome Time. They are often nicknamed as 'Snubbies' to go with their endearing nature. Indo-Pacific bottlenose dolphins: These playful dolphins are slightly larger than 'snubfin dolphins, at around 2.7 metres long. Occasionally seen riding the bow of our catamaran, these playful dolphins will live in close association with other dolphin species and mixed pods are often seen along our coastline. Turtles: Roebuck Bay is home to five out of seven of the world's sea turtles and they are frequently seen breaking the glassy surface of the water to take a breath and warm up their cold-blooded bodies. Dugongs: An extremely rare and bizarre-looking marine mammal, the dugong's closest land relative is the elephant. The dugong's tail is very different from that its closest aquatic relatives, the West Indian, Amazonian and Florida manatees, as it is fluked like a dolphin's tail, rather than being shaped like a paddle. Seabirds Roebuck Bay is a globally important seabird habitat and is the overwintering site for numerous species, many of which are endangered. After performing their 6-day non-stop migration from their breeding grounds around the Yellow Sea in China, the birds spend the next six months feeding on the plentiful food in the mudflats, using their specialised bills to feed on crustaceans, fish and molluscs. Coastal manta rays: The second biggest ray in the world, the coastal manta ray can grow to have a wingspan of over five metres and feeds exclusively on plankton, which is in plentiful supply in Roebuck Bay. Believed to live for around 40 years, coastal manta rays will only produce a single pup every two or three years. Sea snakes: These reptiles look and move just like their on-land relatives, bar their slender, eel-like tails. As they are reptiles, they must come to the surface to breathe and this is where they are often seen while on tour. One of our sea snakes is actually the most venomous snakes in the world but, luckily for us, they are terrified humans so will very quickly slither away when they see us. Sharks: The health of any habitat can be determined by the presence of top predators, and the pristine ecosystem that is Roebuck Bay is the feeding place of hammerhead, bronze whaler and tiger sharks. These very well-fed predators are occasionally seen from the boat but hard to spot due to their clever camouflage, known as counter-shading.

What to bring: Camera, sunglasses and water bottle. What to wear: Jumper, thongs or slip-off shoes and hat. Conditions: Infants of 1 year are free of charge. For young child rates apply for 2 to 4 years, child rate applies from 5 to 14 years. 15 to 64 year consider for adult pricing and 65 or above consider as senior. Please note in the event of a cancellation due to weather, you may be contacted and rescheduled to a different time of day. Please confirm if you have a dietary restricts at the time of booking.

Child up to 12 years:
Check Options